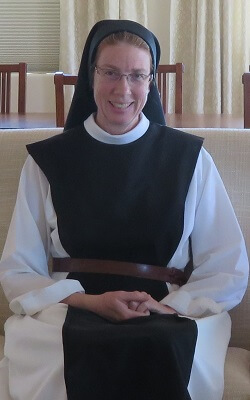 Born and raised in a Protestant family, I’d been hearing the Gospel message all my life, but the retreat speaker in my sophomore year of college put it in such a way that God’s love came alive for me as it never had before. I lost my heart to God right then and there, and from that day on, I had to find a way to give my whole self to God.

The usual Protestant options didn’t seem to fit; what I wanted was a whole way of life, not just a ministry career. I was a junior when it suddenly hit me: “I could be a nun.” But a nun was a woman who never married, a woman for whom God was Everything!

Was God really calling me to that? It wasn’t until the Easter Vigil of my senior year, in the quiet after Holy Communion, that suddenly I knew beyond doubt: “I can’t get married: in my heart I’m already married to God.”

There weren’t many options for Religious Life in the Protestant world, which led me after graduation to a Catholic parish and its R.C.I.A. class. I was delighted by what I found there: the same Gospel, people who loved God as crazily as I did, and a rich liturgical and mystical tradition. At the next Easter Vigil, I became a Roman Catholic.

There were two contemplative monasteries near where I lived. I spent as much time as I could with both communities, until it became clear to me that while I admired the Benedictines, somehow I felt more truly at home with the Cistercians. The community accepted me, and so four years after that initial college retreat, I entered the Trappist Cistercian monastery of Our Lady of the Santa Ritas.

I entered January 10, 1950. This year I am celebrating sixty years of Profession in the Order.

I had been at Friendship House (Now Madonna House in Canada) during the summer of 1949. Friendship House was on 135th Street in Harlem, NYC. This was before the Civil Rights movement of the 60’s. People were poor and discriminated against. Drugs and prostitution were all around us. Our neighbors were aware of the seeming hopelessness of their lives. A college degree didn’t mean a thing if you couldn’t get a job because of the color of your skin.

A second turning point that summer was a Sunday afternoon picnic with a boyfriend at Riverside Drive Park. It was August. There were hundreds of people sitting on the grass.  I was so forcefully aware that very few, if any, were thinking about God – to thank Him, love Him. Some of us should give our lives to do that; not to get anything out of it but because He was worthy of that dedication. God is still worthy of it and the world still needs prayers of peace and love. 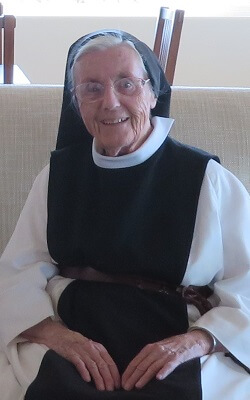 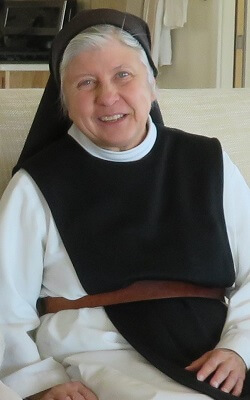 I first noticed the tug at my heart and mind in grammar school. I loved the religious women who taught me. They led me to learn new things. From them and my family I saw a way to give oneself to God. High School brought new things to learn and live. Family and religious women in my life again led the way. My life opened up in service: to the poor, to those abled in ways different than I – mentally, physically. I tutored, helped in little ways. I roller skated, went to dances, dated, was active in Sodality and Film Club. The tug at my mind and heart was there. I needed more maturity and experience to know how to respond. I knew that much.

I went to college. I studied history and theology. After graduation I taught young children and worked with their parents. I taught Catechism. The tug at my heart and mind was there as I read and prayed. In my reading I heard of Cistercians. One day I checked the Catholic Directory to see if there were Cistercian Nuns. I found some.

Then, on a date I spent part of the time talking of how I was thinking of becoming a nun. I decided I needed to make a decision on this “tug”. It was ruining my social life. I met with a spiritual director. I prayed more and read more. I went on retreat to Santa Rita Abbey in Arizona, one of the Cistercian Nuns’ places I had found. I love the Southwest, the desert – it seemed a good fit.

The tug at my heart and mind continues. It changes and grows. It will be there and I will be here until the day I am tugged wholly into God.