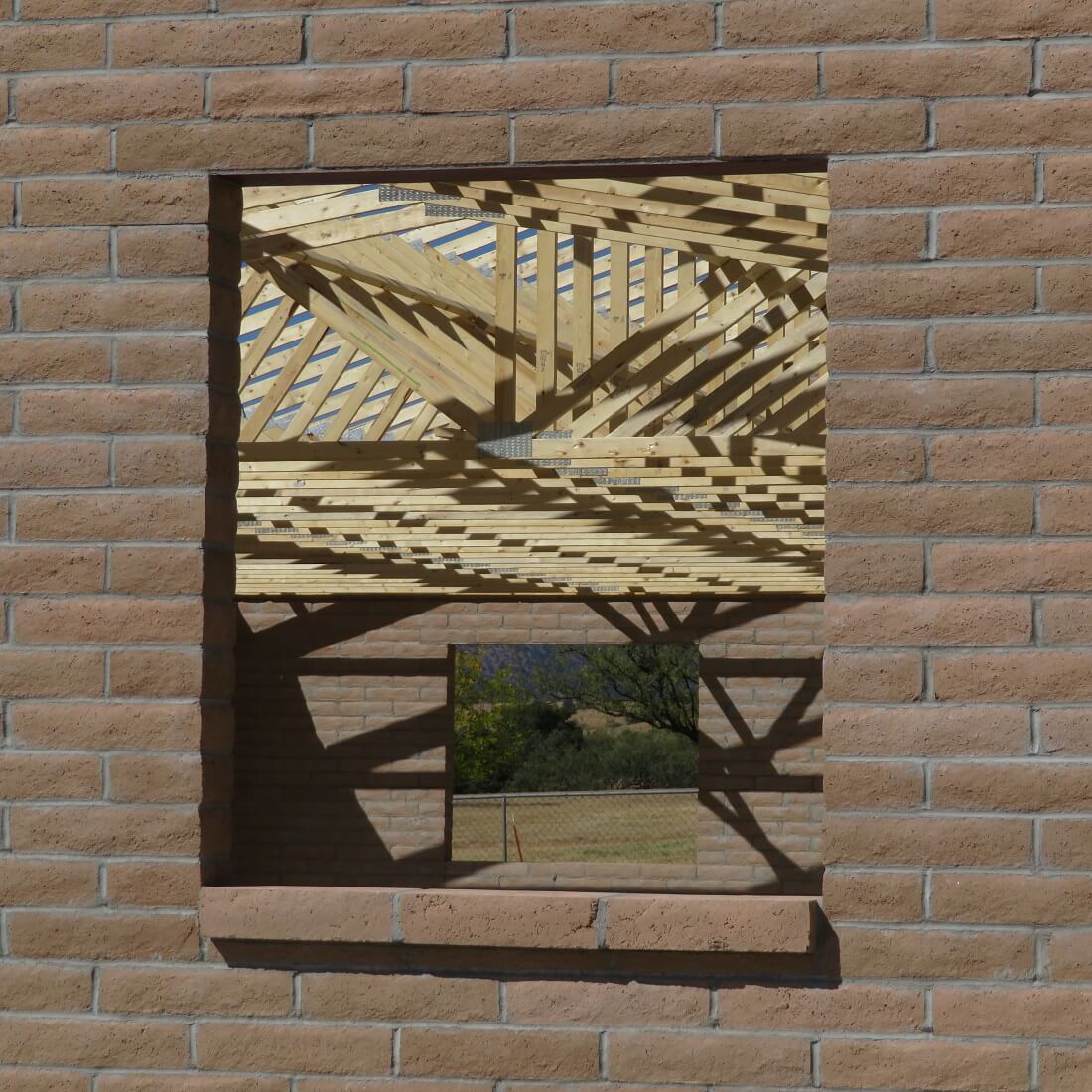 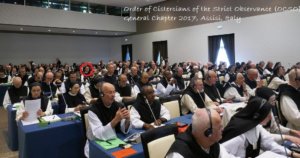 Mother Vicki was away at our Order’s General Chapter for most of the month of September. It is always an extraordinary experience to be among abbots and abbesses of our Order from all around the world–the unity of the Order, of the Church, of the human race, is profoundly felt. A highlight was the private audience with the Holy Father in Rome. See the red circle in the photo above? That’s our Mother Vicki among the capitulants in the aula at the Domus Pacis conference center in Assisi, Italy. To see more photos, go to the official blog at http://cgen-ocso.blogspot.it/ and click on the gallery and papal audience tabs.

Meanwhile, back at the monastery … 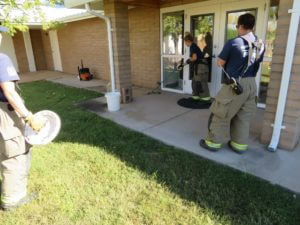 We had a couple of exciting encounters with wildlife towards the end of September! First, a confused deer in the church garth jumped through one of the windows into our cloister hallway. Sisters Esther & Kate heard the crash of breaking glass and found the poor creature in the hallway! They were able to herd the deer up the hall to the phone booth where there is a sliding glass door for it to escape back outdoors. As far as we can tell, the deer was not injured. Sr. Pam cleaned up the broken glass and blocked up the broken window. Two days later, after replacing the window and while carrying her tools back to her office, Sr. Pam encountered a rattlesnake on the sidewalk outside the art building! The snake kindly warned her of its presence by setting off its rattle, so she did not step on it, but jumped back. After alerting Sr. Rita (our second superior, who was in charge while Mother Vicki was away at the General Chapter), she called our Sonoita-Elgin Fire District’s non-emergency number and requested their assistance with rattlesnake removal. A crew of three fire fighters, two men and one woman, came right over. It was the woman fire fighter who very calmly extended a long-handled snake grabbing tool, gently captured the snake, and lifted it into a special snake bucket. One of the men put the lid on the bucket. The snake was taken away to be released back into the wild at a safe distance from buildings and people. Thank you to the Sonoita-Elgin Fire District for helping us out! 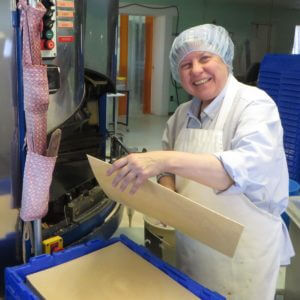 Our Cistercian Altar Breads bakery had its own adventures: our “water chiller” broke down. For optimal mixing of our altar bread batter, the water needs to be at 60 degrees Fahrenheit. We have a used water chiller which has provided us with the necessary 60-degree water for many years. It also measures the precise quantity of water needed for a batch of our altar bread batter and delivers it via a special hose into the mixing vat. When it broke down in early August, Sr. Rita (who is in charge of our bakery) became our human water chiller. The day before each baking day, she filled eight five-gallon buckets with room temperature water and put them in the walk-in cooler to chill overnight. At intervals throughout next day, she poured a bucket of chilled water into the broken down water chiller, adding a bag of ice cubes for good measure, before each of the eight daily batches of batter could be mixed! It took several weeks to get the necessary parts to fix the machine, but at last, multiple parts arrived in a large box. Rich Moreno, our local handyman, is a refrigeration expert and even though the parts were a bit too large for our old chiller, he got it all taken apart and put back together and working better than it ever has before! Thank you, Rich, and thanks be to God! 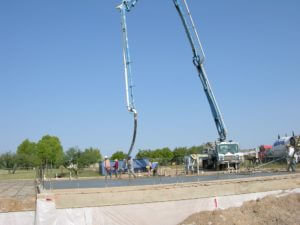 September 6: the concrete crew and cement pump operator at work pouring the floor of the new Family Guest House 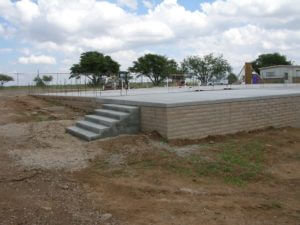 September 9: looking from the SW at the completed floor of the new FGH. The old FGH can be seen on the far right.

All summer the work on our new Family Guest House was with the foundation–digging footings, building the stem wall, back-filling layer upon layer, until we had a solid level surface on which to build our house. In early September the concrete slab was poured, and then the exterior walls went up. It was exciting watching the progress day by day. At this writing, in mid-October, the carpenters are putting up the roof trusses. We’ll let the photos tell the story. 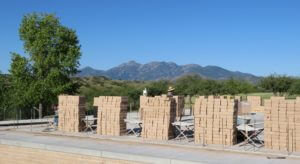 September 13: the masonry crew getting set up for wall building 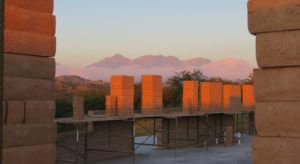 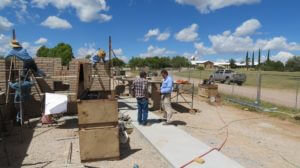 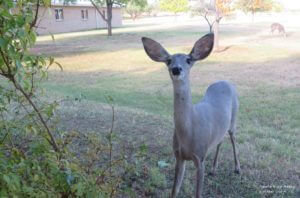 The construction crews have enjoyed watching our neighborhood deer who seem unafraid of them. Unconcerned, they play and graze close to the building site. 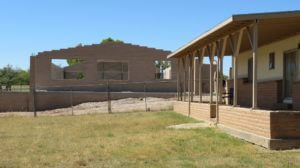 September 26: that’s the back of the old FGH in the foreground, while the new FGH stands in the background with its completed exterior walls. 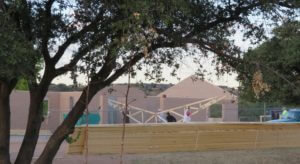 October 12: the carpentry crew begins putting up the roof trusses 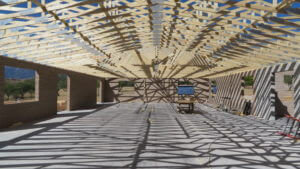 October 14: interior of the new FGH 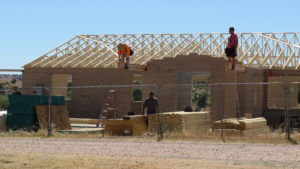 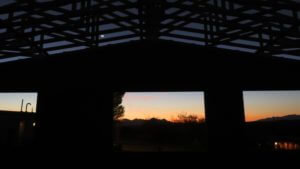 October 17: the crescent moon peaks through roof trusses at dawn